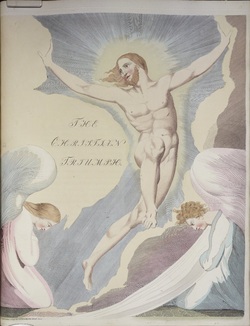 We looked at JRL's copy of Edward Young's poem Night Thoughts, with engravings by William Blake.

First published between 1742 and 1746, Night Thoughts is a meditation on life, death, loss, and immortality. This poem was immensely popular throughout the eighteenth century and into the nineteenth century, but no edition matched the ambition of Richard Edwards’ commission of Blake to surround the pages of the poem with full-page engravings.

Between 1795 and 1797 Blake produced 537 designs in watercolour (now in the British Museum), one for each page of the poem. The plan was that Blake would engrave about 200 of the designs for the published edition, which would be issued in four parts. The first volume appeared in 1797, but Edwards never seriously attempted to promote or sell the book, and the remaining three volumes were not created.

Blake was fascinated by ideas about the body, including the human body and its relation to the divine likeness, and in Christ as a corporate body. Human bodies appear in all of his Night Thoughts engravings, and are various in state and scale. For example, we see tiny bodies interacting with giant figures, skeletal bodies, resurrected bodies, and bodies which surround the panes of text, seeming to embody or transform Young's text.

The Rylands’ copy of Night Thoughts (S16123) is one of twenty-six copies which were hand-coloured by Blake and his wife Catherine. Known as ‘O,’ the Rylands' copy was given by Edwards to his patron, George John, 2nd Earl Spencer. Lord Spencer’s great private library at Althorp became the foundation collection of The John Rylands Library in 1892.

You can view the complete book via LUNA.

You can read more about JRL's Blake collections (including Night Thoughts) in an online exhibition, Burning Bright.

The image above is the frontispiece to 'Night the Fourth' of Edward Young's Night Thoughts, engraved by William Blake (1797, S16123) and is reproduced by courtesy of the University Librarian and Director, The John Rylands Library, University of Manchester.
Powered by