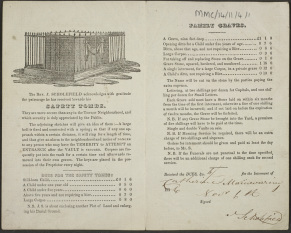 In the eighteenth and early nineteenth century, graveyards were not simply places to bury the dead - they were also places to procure corpses…

With an enduring legacy that underpins the foundations of modern medical knowledge, body snatching – the act of illicitly disinterring corpses for dissection – was a lucrative business. Prior to the passing of the Anatomy Act 1832, the only legal source of cadavers for dissection and the instruction of anatomy were those of executed murderers. The limited number of people hanged for this crime was insufficient, however, to supply the growing numbers of students practicing dissection in private anatomy schools across the UK.

With demand outstripping supply, anatomists turned to a dubious class of entrepreneurs – the ‘resurrection’ or ‘sack ‘em up’ men – for teaching material. Stealing into burial grounds under the cover of darkness to remove the bodies of the recently deceased, corpses were dismembered and sold in pieces or measured and sold by the inch (Richardson 2006: 156). Whilst this commodification of the corpse may seem shocking – although they have long been, and continue to be, exploited for commercial purposes – body snatching was not a criminal offence in itself. In the eyes of the law, there can be ‘no property in a corpse’: in terms of ownership, they are ‘untouchable’ and unless the body snatchers were caught with grave clothing or other items interred with the deceased, so were they.

The activities of the resurrection men provoked widespread horror. Dissection was feared for a number of reasons, not least because it was subject to wild speculation and rumour, with whispers of corpses being fed to anatomists’ dogs or used to make soap and candles (Bennett 2005: 227). Principally, however, the distress expressed towards dissection rested upon its contravention of the traditional care and treatment of the dead – it broke long-standing taboos that rested on popular understandings of the dead body, lingering Christian beliefs in its physical resurrection and the positioning of dissection as the ultimate form of criminal punishment.

Deeply feared by the wealthy and poor alike, considerable time, effort and money was spent on thwarting the body snatchers and ensuring that the dead could rest in peace undisturbed. Undertakers benefited from the fear generated by the resurrectionists and their nefarious activities, as the rich went to elaborate lengths to protect their mortal remains and those of their loved ones. The safety tomb designed by J. Scholefield – a clergyman from Ancoats in Manchester – is but one of many such measures deployed to safeguard the dead and ensure they remained ‘untouchable’. The tomb was fitted with a large bell which sounded if any attempt was made to access it.

In 1832, an Act of Parliament sought to provide a new legal source of corpses that would be so cheap and easily available, that it would undermine the body snatchers’ grip on the trade in cadavers. Dissection was withdrawn as a posthumous punishment for murder and instead it was decreed that the destitute should bear the brunt of the anatomist's scalpel and be dissected in the name of scientific progress. Those who died ‘on the parish’, without enough money for a funeral, would henceforth be liable for dissection and effectively penalised for being poor – an idea that "suited the dominant politics of the day” (Richardson 2006: 160).

Perhaps somewhat startlingly, this position was not repealed until 2004 with the introduction of the Human Tissue Act. The negative cultural impact of the body snatchers still resonates, however, in the ambivalence we feel towards the corpse and in the distress regularly expressed at ‘breaking up’ the body. This anxiety is, arguably, reflected in recent medical scandals surrounding the unauthorised retention of human body parts and in the stubbornly low number of registered organ donors in the UK. The inclusion of the Rev. J. Scholefield’s safety tomb in this symposium touches on many aspects of the ‘untouchable’ nature of the corpse and encourages reflection on the medical, political, spiritual and ethical discussions about what happens to our bodies after death.
Katherine Crouch

The image above is an advertisement for Revd. J. Scholefield's Safety Tomb, c.1830s (Manchester Medical Collections GB 133 MMC/14/11/4) and is reproduced by courtesy of the University Librarian and Director, The John Rylands Library, University of Manchester.