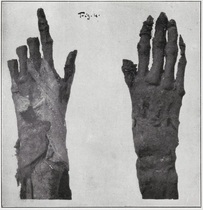 Perhaps most famous for the vengeance they allegedly wreak on anyone who dares to defile their final resting place, the infamous myth of the ‘mummy’s curse’ arose not out of fear of the dead, but pity for the mummified remains of ancient Egyptian (Day 2013). Preserved for eternity – ‘untouched’ by the process of decay and decomposition – the physical and symbolic qualities of mummies have seen them (ab)used for a variety of social, political and economic agendas, rendering them one of the most historically mistreated ‘bodies’ of archaeological ‘material’.

Egyptian mummies have been ‘objects’ of fascination (and horror) since at least the early 1800s, but long before they became a staple feature of museums across the globe they were, for several hundred years, largely treated as commodities – bought and sold as purely biological matter. During the sixteenth and seventeenth centuries, the well-preserved remains of ancient Egyptians were routinely ground into powder and consumed as a medicinal remedy. At this time, many Europeans regularly ingested concoctions made from human corpses that were believed to cure everything from headaches to epilepsy (Dolan 2012). Indeed, allusions to corpse medicine may be found in Shakespeare’s Othello and, despite cannibalism being regarded as a mark of savagery elsewhere in the world, the practice persisted into the nineteenth century (ibid). Indeed, so popular was pulverised mummy that it even instigated a counterfeit trade to meet demand, in which the flesh of beggars was passed off as that of ancient mummified Egyptians (Sugg 2008).

As the Industrial Revolution progressed, so Egyptian mummies were exploited for more utilitarian purposes: huge numbers of human and animal mummies were ground up and shipped to Britain and Germany for use as fertiliser (Day 2006: 25). Others were used to create ‘mummy brown’ pigment or were stripped of their wrappings, which were subsequently exported to the US for use in the paper-making industry (Aufderheide 2003: 524). The author Mark Twain even reported that mummies were burnt in Egypt as locomotive fuel (Day 2006: 25). As the nineteenth century advanced, mummies became prized objects of display and scores of them were purchased by wealthy European and American private collectors as tourist souvenirs. For those who could not afford a whole mummy, disarticulated remains – such as a head, hand or foot – could be purchased on the black market and smuggled back home (Day 2013). Here, mummies would be unwrapped at society parties, in which “otherwise sanctimonious Victorians felt no qualms [about] desecrating pre-Christian bodies” in the name of spectacle and even sent “specially-printed invitation cards: 'Lord Londesborough at Home: A Mummy from Thebes to be unrolled at half-past Two” (Fletcher 2011).

Once unwrapped and interest waned, many of these mummies would eventually find their way into a museum, where again, they were largely displayed as curiosities and fed the public appetite for all things Egyptian. Modern curatorial practice has seen the isolated display of mummies and mummy parts increasingly become a thing of the past. Unless they serve an educational purpose, then display is not considered appropriate or justifiable from an ethical perspective. Encased behind glass or held in storage away from prying eyes, Egyptian mummies have once again become ‘untouchable bodies’. Indeed, recent debates surrounding the ethics of displaying archaeological human remains saw the Manchester Museum – home to an extraordinary Egyptian collection – experiment with alternative forms of display in regards to its collection of Egyptian mummies in 2008, including shrouding the remains so as to restore their former wrapped appearance as a mark of respect.

The University of Manchester has long pioneered innovative approaches to mummy research, beginning with Margaret Murray – an Egyptologist at the Manchester Museum – who, in 1908, was the first woman to publically conduct a mummy unwrapping. Poised between science and spectacle, the event was directed at both a scholarly audience and the general public and her report of the investigation remains one of the leading studies concerning the mummiﬁcation process in Middle Kingdom Egypt (Sheppard 2012: 526). Following in her footsteps, Rosalie David established the world-renowned Manchester Egyptian Mummy Research Project in the 1970s that instigated the use of the ‘Manchester Method’ – the non-destructive investigation of mummy material that is now employed by research centres across the world. Today, ground-breaking mummy research continues to be conducted at the University and in 2006 the KNH Centre for Biomedical Egyptology was launched. Nevertheless, Egyptian flesh was never preserved for the benefit for museum visitors, scientists or the commercially minded – it was to serve as a house for the ba – equated with the soul, or life-force, of the deceased (Giles 2013: 487). The inclusion of Egyptian mummies in this symposium therefore encourages discussion about the ethics of displaying the dead, the commodification of the corpse and the preservation of the dead body.
Katherine Crouch